Today we departed Látrabjarg and headed for Ísafjörður. Today’s drive would be mostly about the scenery and the weather was totally cooperating. Blue, cloudless skies meant abundant sunshine.

We had much better roads than we had in the Látrabjarg area, but it was still a lot of high mountain passes with steep inclines and descents. But the views were spectacular! 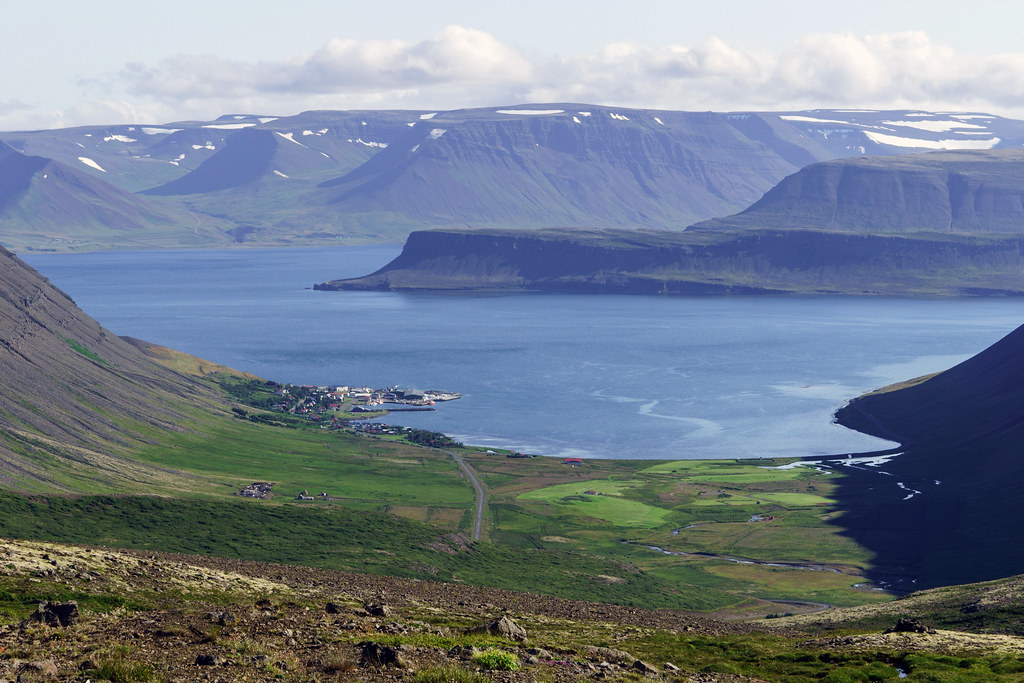 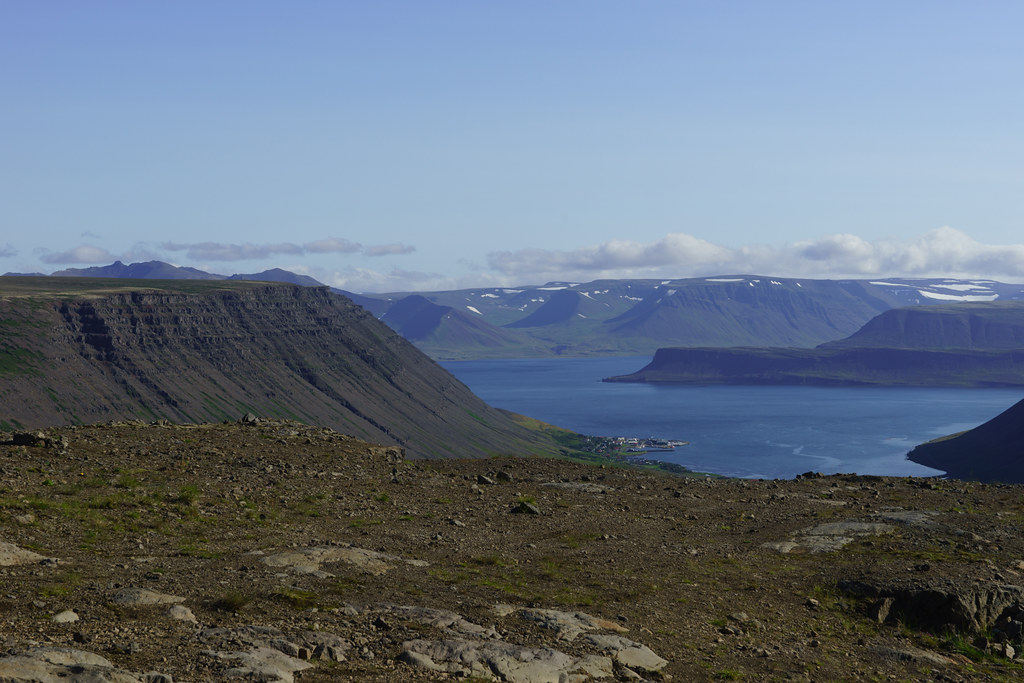 We wound our way up and down one fjord after another and crossed high into the mountains. In Iceland it is hard to find a place to pull over to take photos, so many things just have to be seen and appreciated without a photograph. But lord knows we tried our best. 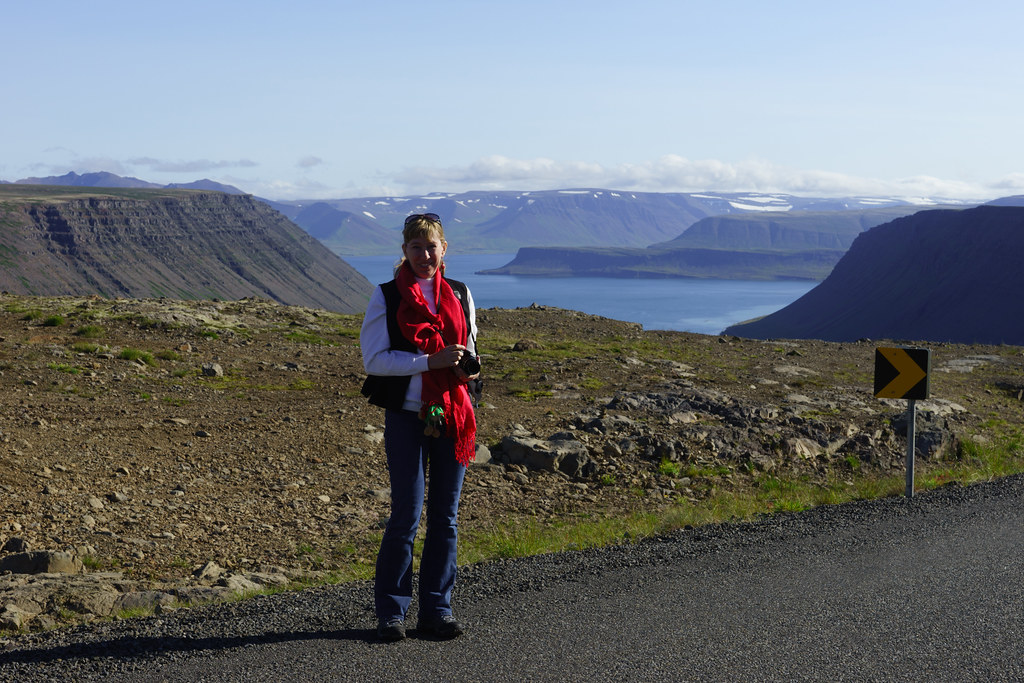 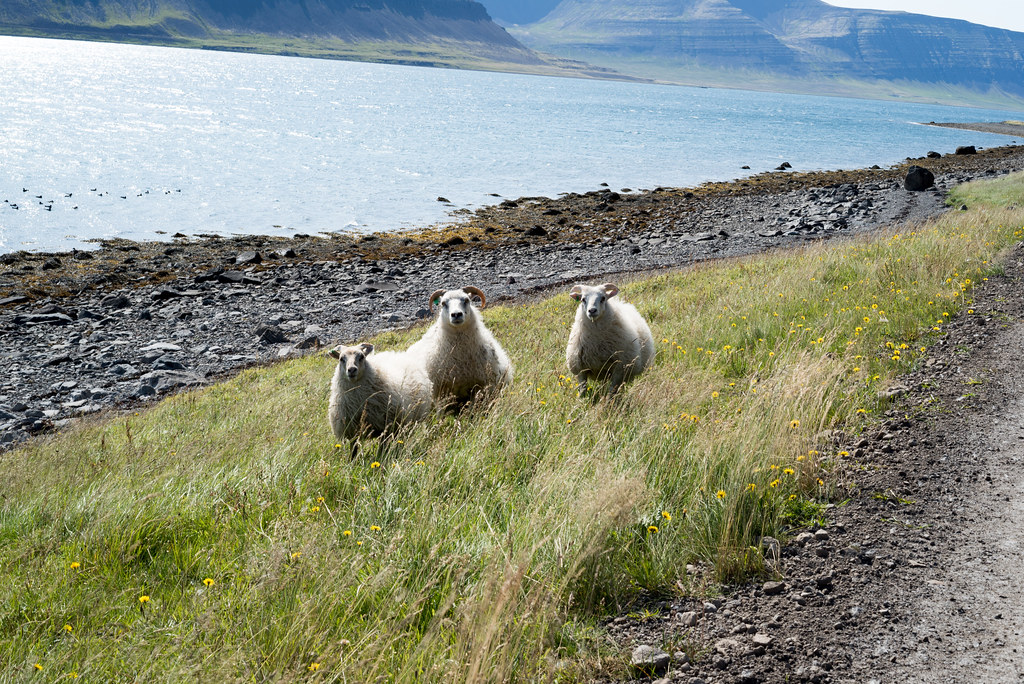 Eventually we came to the mighty Dynjandi waterfall. The largest and most beautiful in all the Westfjords. 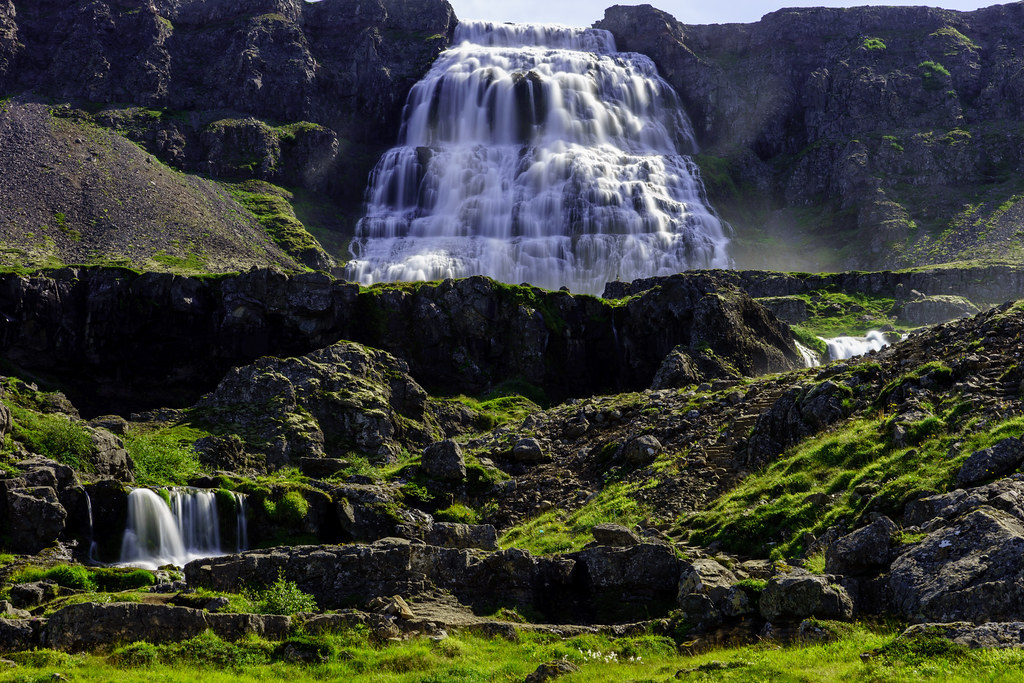 Cynthia wanted to hike to the top and so did I. I quickly realized I wasn’t going to be able to make it up the slippery and steep rock surface so Cynthia trekked on ahead while I lingered below.

I took advantage of our casual schedule and took several different photos of the falls. 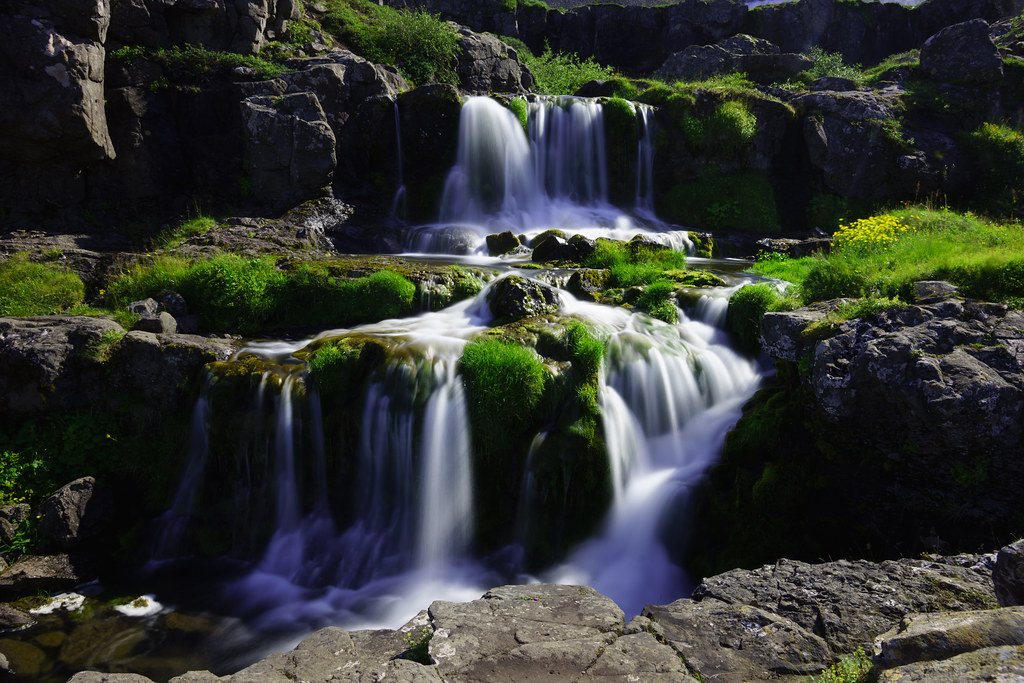 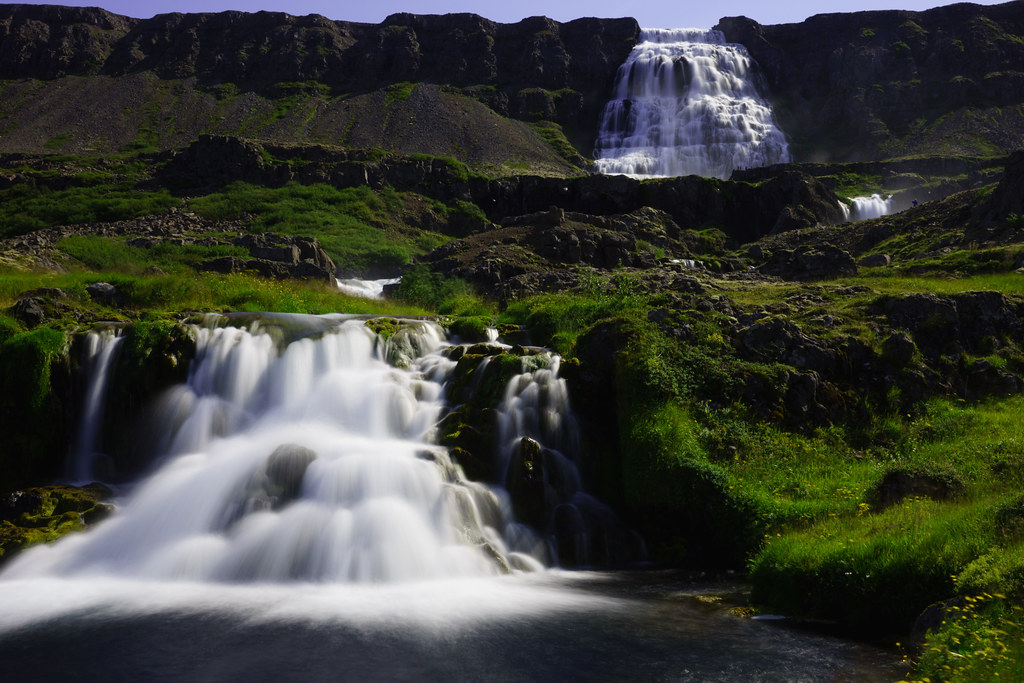 After about an hour Cynthia found me. I asked her if she made it to the top and she said she did and she had the photograph to prove it. After getting our fill of the waterfall we got back in the car and made our way to Ísafjörður. The road held one more terror for Cynthia. The Vestfjarðagöng tunnel from Flateyri to Ísafjörður, the longest tunnel in all of Iceland, which goes for just under 4 miles. 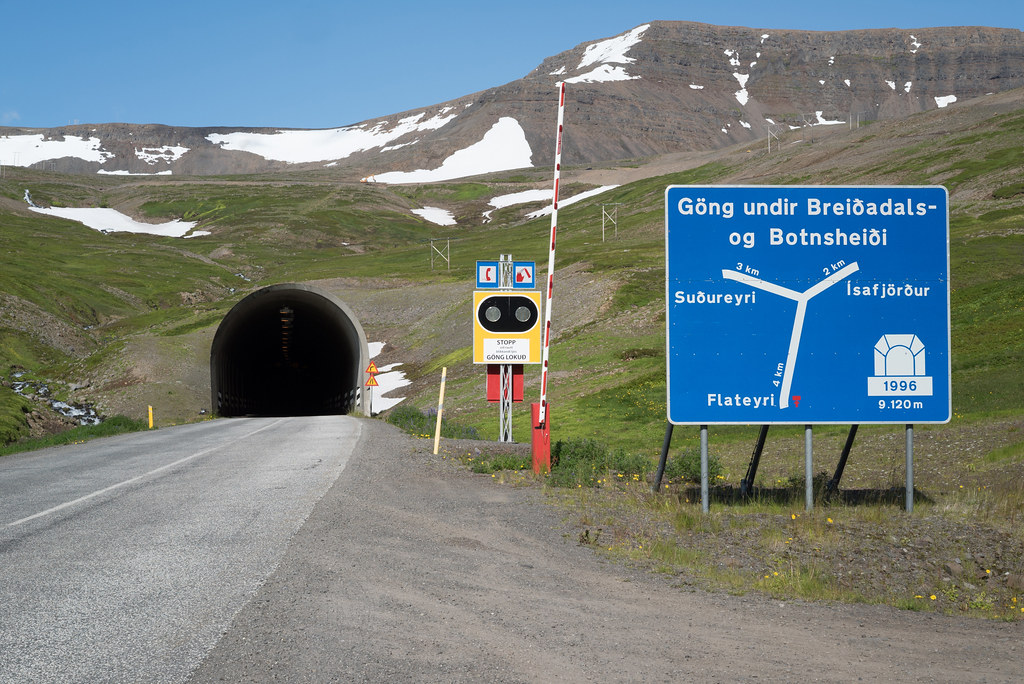 Cynthia is slightly claustrophobic, but managed to hold it together and took this photo as we passed under the earth. We made it to Ísafjörður without incident. The car was pretty dirty from all the dirt and gravel roads. I had read somewhere that service stations in Iceland often had a complimentary car wash area where you could clean up your vehicle. I found one at the local N1 and gave the beast a good wash…in the cold. After checking in to the hotel we went out for some dinner. I decided to try something different and had filet of horse which ended up being very tasty. 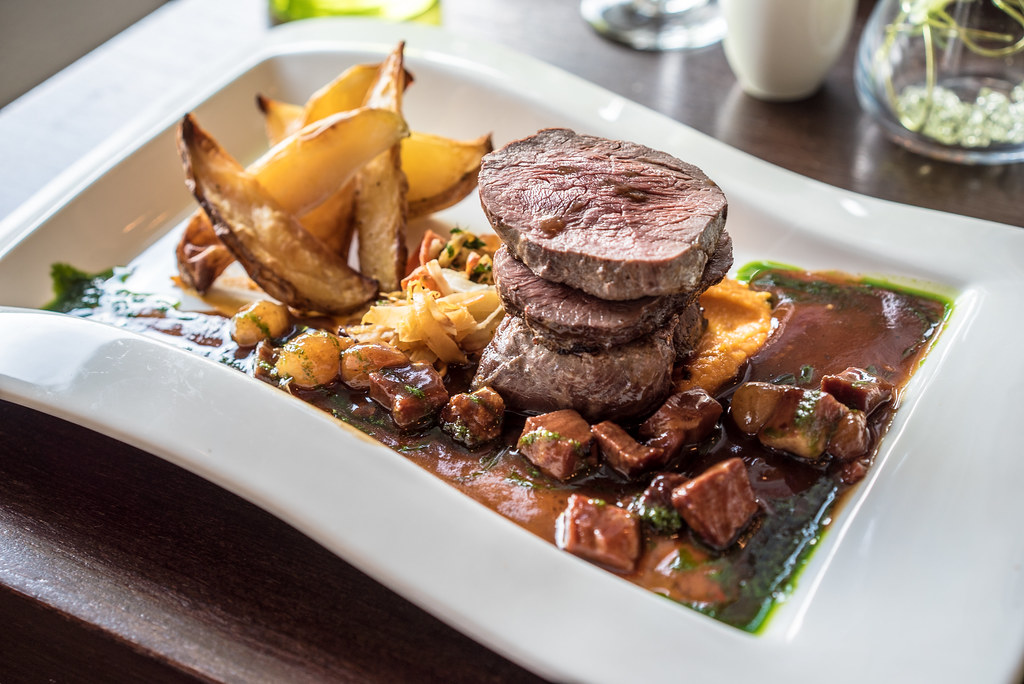 Tomorrow we’re off to Drangsnes.